NOS Alive, formerly Optimus Alive, is the leading music festival in Portugal and has caught the rest of the world’s attention due to a single combination of an eclectic line up, warm weather and unique coastline location. NOS Alive takes place in the magnificent city of Lisbon with its wonderful sunny weather. And here there’s so much you can do before going to the festival. The site is 10 minutes away from the city centre, which allows you to enjoy Lisbon’s historical landmarks and bustling nightlife. You can experience as well the world famous and amazing Portuguese food. Being a coastline city, you can enjoy some time at the beach. Surf is one of the favourite sport activities you can enjoy before getting to the festival site. NOS Alive is referred as one of the best summer music festivals in Europe by international press such as The Guardian, Times, Clash, Mixmag and NME. During its 11 years of existence, those who have visited us enjoyed fantastic line ups, including bands such as Arctic Monkeys, The Black Keys, The Libertines, Depeche Mode, Coldplay, Radiohead, The Cure, Pearl Jam, Beastie Boys, Smashing Pupmkins, Neil Young, Bob Dylan, Blondie and many more. NOS Alive 2017 welcomed Depeche Mode, Foo Fighters, The Weeknd, Ryan Adams, Fleet Foxes, Savages, Bonobo, Floating Points, Peaches and many more incredible acts to Lisbon last July. Sailing comfortably into it’s twelfth year in 2018, NOS Alive continues to develop its impressive international reputation and is considered as one of the World’s Best Festivals by The Guardian, The Independent, NME, CNN, Rolling Stone, Vogue amongst many others. 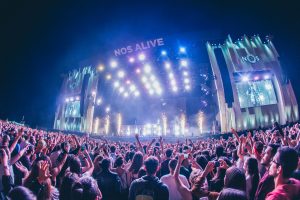 „One of Europe’s Best Festivals“ Time Out London, 2014

„Think Glastonbury with guaranteed sun and a pool“ The Times, June 2013

„This ace Portuguese seaside festival boasts a stonking line-up with something to suit pretty much every taste. And the location couldn’t be more ideal“ Time Out 2017